I waited to write this post until after the preliminary competition of the Miss USA pageant last night, because I wanted to gage the energy of the ladies after all that has transpired since Donald Trump shared his opinions on Mexicans and illegal immigration.

In case you didn’t know, allow me to update you

In what I believe to be an aptly timed and choreographed publicity stunt, Donald Trump made his remarks on illegal immigration and Mexicans very clear when he said, “They’re bringing drugs. They’re bringing crime. They’re rapists.”

Like a ripple effect, these comments resulted in a massive wave of sponsors ending their business relationship with Trump, and therefore dramatically impacting the Miss USA pageant as we know and love it. Univision, NBC, and Macy’s are just a few of the very first who cut ties. Since then, the pageant lost both of its hosts, correspondents, entertainers, networks, along with several judges and pageant sponsors as well. (Mind you, this is all happening as the girls are arriving in Baton Rouge for registration where they’ve been for the last two weeks leading up to the pageant.)

Meanwhile, Trump is boldly standing by his radical opinions of Mexicans in his attempt to take a seat in the Oval Office. Just a few days ago he even called his reigning Miss Universe (who happens to be Latina) a “hypocrite” for being offended by what he said but yet still wanting to keep her crown anyway.

LET ME BE CLEAR WITH YOU ON MY STANCE ON ILLEGAL IMMIGRATION: of course there is a problem in the system. Anything illegal is a problem that I do not condone! This BEAUTIFUL country I am proud to live in is made up of immigrants who came here legally. That’s what makes it beautiful – it’s a melting pot of diversity. Its just the ILLEGAL immigration that I am fully aware is problematic to the well-being of this great country. Further, it is also my opinion that it’s the perception of illegal immigration that truly is the problem here – because often times (not ALL the time) the majority of immigrants do not just “hop” a border and start making a mess of things, but instead have overextended their VISA’s. But those stories don’t make the headlines, do they? It’s the bad guys who do, not the ones contributing to the growth or prosperity to our beloved country. Not the hardworking mom working minimal wage or the kid trying to get a descent education here, or the hardworking dad laboring over jobs no one else wants just so that he can send money back home to his wife and children, but it’s the guy committing crimes that we will see on the nightly news. BECAUSE THAT’S WHAT THE NEWS IS FOR.

But equally, if not more-so problematic (in my opinion) is racism, racial profiling, stereotyping and hate.

To GENERALIZE that all Mexicans (specifically) who are coming into this country are rapists and drug dealers, is just wrong- And it’s going to piss a lot of people off too.

What if I said all men who styled their hair like Donald Trump were racists? That would be such a terrible generalization. Besides, ain’t NOBODY trying to style their hair like that on purpose besides Trump. But that’s neither here nor there.

All this to say:

To the girls competing this weekend: I want you to know that at first I felt REALLY bad for you all. I will never forget how amazing I felt back when I competed in 2009.  We were treated like celebrities from the moment we arrived to Vegas, in every way.  I was honored to have my family and friends there watching it all happen. And for my family and friends who couldn’t be there, I loved knowing they could be at home watching the telecast nationally, live on NBC. So when NBC pulled the plug and announced they wouldn’t be affiliated with Trump anymore (as well as several other sponsors you sadly won’t get to experience as the rest of us in the Miss USA formers club have) I was devastated for you girls. But now, I realize you all are actually so completely blessed with this opportunity to be in the class of 2015!

Here’s one reason why: because it will be the most memorable year since 2009 when Carrie and I had terrible answers when we were in the top 5 together!! (I still owe Carrie dinner for her answer on gay marriage…otherwise I would’ve been the most talked about ‘beauty pageant fail’ that year for not answering my question about universal healthcare AND throwing words around like ‘integrity’ and ‘conviction’ like fricken glitter in an attempt to save my ass.) So yeah, as I was saying, this simply is the most memorable year since then! So, OWN IT. Own it with integrity and conviction ladies!! (see… I knew I would get to use those two together again! Drops the mic…)

Another reason why you’re blessed to be in the class of 2015?

Your UNIQUE year at Miss USA gave the world an opportunity to rally together and start the #SaveTheSash campaign demanding a network to pick up the telecast and air it anyway. We are witnesses to how the world can seriously accomplish some pretty amazing things if we can just come together in unity, love and with purpose. In record time, pageant fans around the world came together and illustrated the power of social media – and the power of pageants altogether. All it took was one person’s brilliant idea to start this project and it grew and grew!! Shout out to Travis Stanton and Jason Smith…and really everyone else who helped save the sash by calling, tweeting, writing, signing and throwing a tantrum like Toddlers and Tiaras.  IT TOTALLY WORKED. Thank you Reelz for picking it up and airing the telecast, for reals. (See what I did there?)

I am mainly impressed by the resilience and fortitude I’ve seen since the first bomb dropped. If last night at prelims was any indication of how you’re all handling everything, then I am incredibly inspired. Standing on that stage is an honor to be able to showcase your confident beauty, hard work ethic, perseverance, and most of all DIVERSITY.

No two women are exactly alike up there (which is AWESOME, and sort of the point isn’t it…?) Every girl is different and beautiful in her own unique way. For 6 of the contestants who are Latina this year, they have such a unique opportunity to negate and shut down Trumps hurtful comments and prove just how powerful and accomplished the Latino community is. So, thanks Mr. Trump for giving us an even BIGGER stage this year. Click here to read about how this years LATINA contestants are handling everything and why they aren’t backing out of the competition.

People ask me if I would back out if I was competing this year and my answer is HAAYYYYLLLL to the NO! I would absolutely still move forward with even MORE pride.

To the ladies competing, keep it up! I am proud of each and every single one of you for remaining so beautiful on the inside out amidst so much madness surrounding you. You have the unique opportunity to prove that your INNER beauty needs to be on POINT during all of this too… because you really can’t fake resilience and happiness under so much pressure. If you can, you should get into politics.

And to Donald, if there’s one thing I’ve learned from you it’s that everyone is entitled to their own opinions in this life. For that, I encourage you to respect the opinions others have that you’ve gone completely mad, especially some of your ex-business partners who stand by their opinions that ending their business relationships with you is the best thing to do, you know, for business. You’re a business man after all, so you of all people should understand. No one likes being fired, but you’ve made a career out of firing people on national TV.  Now, the shoe is on the other foot… so go ahead and take a walk in it.

God bless America.  Bendiciones a Mexico. God bless anyone who has ever been a victim to racism or hate.  And, seriously, God bless your silly hair stylist.

I just can’t help but wonder if the Trumpster thought I was plotting to rape him right there in his office or start up a drug war amongst all the girls while I was at Miss USA. Or, at the very least, if he pondered who it was in my family tree who must’ve come here illegally. 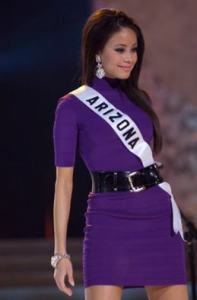 Just wanted a place where people could share uplifting stories that focus on random acts of kindness, inner beauty and other stuff that actually matters. We have so many beauty blogs out there but not enough places to go where people can be real, raw and honest about the more relatable topics many people face. I'm a former "beauty queen" with a passion for celebrating INNER beauty. I'm also a singer, host and pageant consultant PRAYING to see a huge wave of drastic change in the world we live in, one random act of kindness at a time. I want to help make people feel happier and believe we all have the potential to save someone's life just by being good to one another.